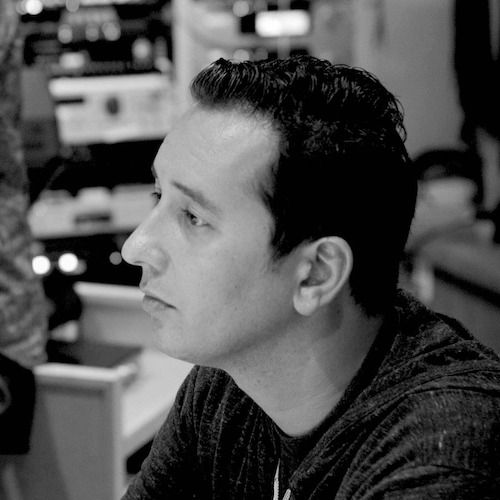 Omar Fadel, an award-winning, Los Angeles based composer for film, television, and video games is now represented by Air-Edel. He is also a multi-instrumentalist, whose scores frequently feature him on a wide array of instruments, including guitar, piano, cello, drums, and percussion.

Born in Houston, and raised between Texas and Dubai, Omar’s global exposure is heard throughout his music. He is a graduate of the University of Texas at Austin where he studied film, music production and composition. Following graduation, Omar re-located to Los Angeles where he began working with ‘The Police’ drummer, Stewart Copeland.

Shortly thereafter, Omar began scoring shorts and feature films.  In 2010, Omar composed the score to the award-winning feature film, ‘The Taqwacores’, which premiered to a standing ovation at the Sundance Film Festival.  He then went on to score the critically acclaimed Lionsgate documentary, ‘Just Like Us’.  In 2011, Omar was selected to score the first-ever Arabic language, American studio feature film, ‘The United’, produced by Walt Disney Motion Pictures. This was followed by Omar scoring the award-winning documentary, ‘In Search of Oil and Sand’.  In 2012, Omar collaborated with composer, Erran Baron Cohen on the score to ‘The Dictator’. In 2016, Omar scored the Academy Award-nominated short film, ‘Day One’.Erika Cohn’s Emmy nominated and Peabody Award-winning documentary, ‘The Judge’, which premiered at the Toronto International Film Festival. In 2018, Omar composed the score for ‘Yomeddine’, which premiered in competition at the Cannes Film Festival and won the François Chalais Award.

In 2013, Omar entered the world of video games collaborating with composer Brian Tyler on one of the industry’s largest franchises, ‘Assassin’s Creed IV: Black Flag’. In 2016, Omar scored the award-winning Virtual Reality game, ‘The Argos File’, which competed at the Venice Film Festival.