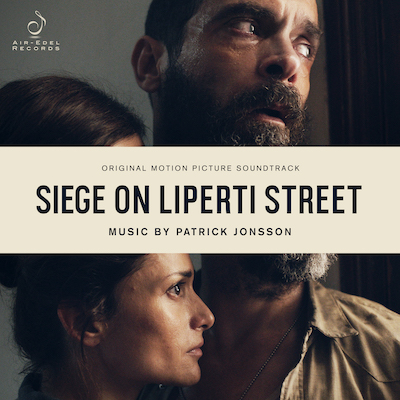 Air-Edel Records are pleased to once again be the chosen soundtrack label for Emmy-nominated composer Patrick Jonsson’s latest release, the original score from “Siege on Liperti Street”. The album, their fourth collaboration together is available today across all major digital platforms including iTunes, Amazon and Spotify.

Set beside the UN Buffer Zone that divides the city of Nicosia, “Siege on Liperti Street” is directed by Stavros Pamballis and tells the story of one family’s struggle to hold on to their home, no matter the price.

“It was such a privilege to compose the music for Siege on Liperti Street. I’m a long-time friend of the director Stavros Pamballis’ and he’s a brilliant storyteller – so when he approached me with this project and told me the story I was captivated. It was so easy to find a way into the story. I believe we can all empathise with a character who will do anything they can to protect their family. Backed against a wall, our main character ‘P’ is driven to extreme lengths in order to protect those closest to him.

The brief from Stavros was that he wanted it to be a western but set in Cyprus. That was such a brilliant departure point to be given and really set me off into thinking how we could approach this film in a way which was familiar to the audience while simultaneously having a unique sonic fingerprint of its own. I used piano, bass, percussion, middle-eastern violin, and oud throughout most of the film, which really allowed for some unique textures and colours to emerge from what’s a relatively unusual ensemble. It was a ton of fun to work on, and I hope audiences will feel it has a strong connection to the fabric of the film and the story we were trying to tell.”  – Patrick Jonsson