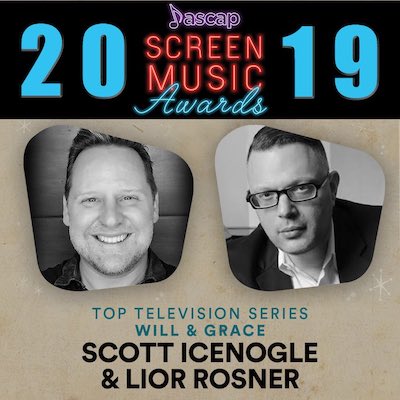 We are thrilled to announce that Air-Edel composer Scott Icenogle and his producing partner, Lior Rosner, have been honoured with an ASCAP Screen Award for ‘Top Television Series’ for hit show ‘Will & Grace’.

Scott has composed for some of the most successful television shows and networks today, including NBC, CBS, CNN, TBS and TV-Land. His first film remix was of the ‘James Bond Theme’ for the 2006 blockbuster film, ‘Casino Royale’ released on Sony Classical. Following this, Scott began composing for television shows including: composing the main title theme for the NBC television show, ‘Sean Saves The World’ for the 2013/14 season and served as music consultant to the producers for the pilot episodes for the hit television shows ‘Grimm’, ‘Hot In Cleveland’ and ‘Hollywood Game Night’. Scott also produced original themes for the pilots for ‘NCIS: New Orleans’, and ‘CSI: Cyber’ and is the composer for the hit television docuseries, ‘The History of Comedy’ on CNN.

Recently, Scott has composed and music supervised for ‘Relatively Happy’ an NBC/Universal film which is from the producers of the ground-breaking television series, ‘Will & Grace’. Scott has also composed for the recent revival of Will & Grace on NBC.