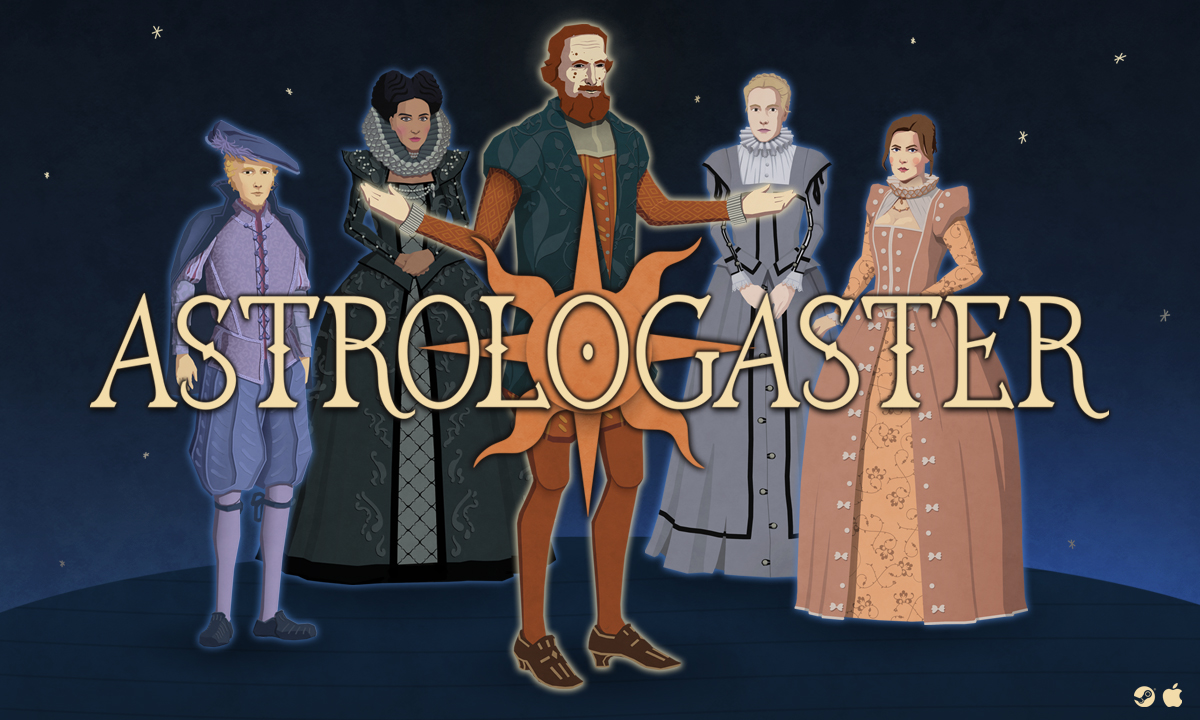 Andrea Boccadoro and Katherine Neil scored the original soundtrack for critically acclaimed ‘Astrologaster’, a story-driven astrological comedy game set in Shakespeare’s London, from Nyamyam Games. We chatted with Andrea to learn more about the process of writing music for games, his collaboration with lyricist Katherine, and the influences that helped them create the “unbridled joy and whimsy” (A Closer Listen) heard in the soundtrack.

Hi Andrea, really great to catch up after a busy time working on ‘Astrologaster’ – it’s been brilliant to see such great reviews. Could you tell us more about how writing music for video games differs from scoring a film?

The most immediate difference, I think, is the interactive nature of the gaming experience. Whilst in a film you can be completely in control of what the audience will hear at a given time, in a video game certain musical and narrative elements are controlled by the player’s choices and require you to conceive time – and composition – in a non linear way. That means, for instance, having tracks which are organised in layers that may or may not play together, and that can effectively form loops, like in the astrological reading. Or, in the case of the characters’ madrigals, to think of harmony and structure in a way that will enable the individual verses to work both as standalone pieces and as a full song. In the in-game score, in fact, the madrigals never play from start to finish but are heard as standalone verses only. The ending cadenzas of each verse had to feel conclusive enough for the in-game version and, at the same time, produce appropriate modulations and momentum towards the following verse, which would be heard seamlessly in the full soundtrack version.

What was your process for developing the music for ‘Astrologaster’?

I started working on Astrologaster in the spring of 2017. Jennifer Schneidereit, the creative director at Nyamyam, described to me the basics of the gameplay and the environments that the player would interact with. She also showed me some assets, gameplay videos and an early prototype. I spent some time researching 16th century English music and experimented with this material, looking for ways of using the period elements in an effective way. The Fitzwilliam Virginal Book was among my research materials and provided me with useful instrumental models from the late Elizabethan period (Bull, Bird, Gibbons).

I came up with a few different concepts for the astrological reading, and expo deadlines provided us with the opportunity of testing some of the music in the prototype, which was a good way to develop the score along with the game design. In late 2017, the game underwent some design changes, and the idea of having voice actors playing Forman’s patients emerged. Katherine Neil, the writer, became more involved with the music collaboration and this was a fantastic opportunity, because she is also a music graduate and a singer. We had previously discussed the idea of having vocals as part of the score, and we moved forward writing a short choral piece to introduce each character, with lyrics by Katharine. But by the end of 2018, the game had taken an even more vocal-heavy direction with the use of voice actors, and we felt that the songs could actually become a highlight of the score. The direction we took was to have a new verse introducing each consultation, instead of having only one ‘‘choral jingle’’ per character. Fully developed madrigals and motets, with 5 to 7 verses, could deliver more jokes and characterize the patients in detail, whilst giving extra clues to the player for the astrological reading.

A really interesting transition from the originally planned score to the soundtrack becoming primarily madrigals and motets. Could you tell us more about how the games’ place in history influenced your writing, and the composers you drew inspiration from?

The brief was that of a Renaissance-stylised score, to match the Elizabethan setting. I wrote the early drafts trying out various instruments (harpsichord, lute, recorders, viola da gamba). As I mentioned, the score gradually took a very ‘’a cappella’’ direction, but this rich period instrumentation can be found in the theme song ‘Astrologaster’, which introduces the game and closes the soundtrack album.

Regarding the madrigals, the choir is an instrument that travelled across various ages of history, so it isn’t necessarily Renaissance sounding. It’s the use of counterpoint, harmony and cadenzas which characterises the period in which the game is set. The musos will probably find that these songs are a sort of Renaissance pastiche, not very strictly English or 16th century. In addition to the influences of Morley, Bird, Tallis, I wanted to recall the music of Monteverdi, Palestrina and some Flemish composers. For instance, Thomas Blague echoes Josquin des Prez’s Ave Maria and its ‘bicinia’ and ‘tricinia’ (moments of duet or trio in the choir, which alternate various vocal combinations). Fap not, Forman reminds me of Jesu, Rex Admirabilis! by Palestrina. John Whitgift, instead, recalls an obscure and virtuosic Flemish motet called Fera Pessima, which I used to sing really badly! Some other pieces like Nicholas Mugg and Riccardo Ferraro are a little freer from the Renaissance conventions, drawing more on caricatures of the hypochondriac and Italian features.

How did you find collaborating with Katherine?

It was a very smooth and enjoyable collaboration. Katharine was well familiar with the referenced repertoire, not only from a literary point of view but also musical, and Jennifer trusted her with most of the reviewing process. We would look at the references together, and be able to discuss musical changes in detail by looking at the score, which Katharine would be able to read fluently. This also meant that I didn’t have to pitch a choral mock up to get the music approved, which enabled the whole aesthetic vision to be protected. I don’t think you can demo this kind of music properly, and the mocking up could have ended with the whole idea of having madrigals being scrapped.

Katharine has been very respectful of my creative freedom throughout, and sometimes changed her words to accommodate music patterns that I particularly liked. On the other hand, her lyrics were brilliant and would always provide a great starting point for the first draft of a song. We had fun in the process and not many changes were needed, as we were on the same page creatively.

That’s great! Could you tell us more about your process in working with the singers, and the wider music team during the recording sessions?

The recording sessions were an absolute delight! I have to thank Benjamin Woodgates (conductor) and Emily Holley (music supervisor) for making this possible, as well as the wider music team (Nick Taylor, record and mix engineer, Sam Jones – additional orchestration and score preparation, and Nick Harding, edit engineer).

As the music direction had changed quite drastically over the final months, we had unexpectedly challenging music to perform and deliver. With the budget and time limitations, we couldn’t do any rehearsals and all the music needed to be sight read at the sessions. This is a normal scenario in scoring sessions, but with complex vocals like these it can be a much tougher ride than with the orchestra. Luckily, Ben and Emily Holley introduced us to Emily Dickens and the rest of the vocal group (Ruth Kiang, Benedict Hymas, Jimmy Holliday, Robin Bailey, Christopher Webb). Their performances and easiness reading through the material really struck me! I’m also very happy we recorded everything without click: it made the editing process a bit slow and tricky, but we got very natural performances.

How did you develop the music to work with the game environments?

‘Astrologaster’ was a unique project, with a strong theatrical influence, a periodical setting and a comedy angle, all elements which I tried to respect and integrate with the design of the game. From a creative point of view, I almost felt like scoring an animated theatre play with interactive elements, something like a hybrid between theatre, animation and video game.

Due to the theatrical approach, there isn’t a lot of interactive music and I felt almost like scoring staged scenes. There are three environments in which the score functions, and the player goes through them at every consultation. The first one is the character’s introduction, outside Forman’s office. Each character will come for a variable number of consultations and, every time they are back, the player will hear a new verse of their madrigal. The lyrics relate to the specific moments in the storyline, and contain additional information that can be useful for the consultations. The chorus is almost a character in itself, commenting on the patients’ vicissitudes, and taking a liking to certain characters whilst being sarcastic towards others.

The second environment is inside the office, where Forman interrogates the patient about their problem. This is underscored by a harpsichord version of the character’s madrigal. These arrangements nicely sustain the vibe which is established with the choral introductions, and accompany the wonderful voice acting work, which is the real audio highlight of these sections.

Eventually, the player enters the astrological reading (third environment), where a looping drone is embellished by interactive zither chords, triggered by touching the various zodiac signs and potential answers. In addition to these, various other virginal and bell stings are used throughout the game, such as the recommendation letter obtained, or when Forman is questioned by the College of Physicians.

Thank you very much, Andrea! It’s been so great to hear more about the scoring process for the game.