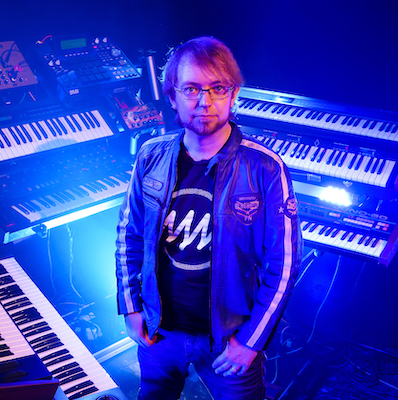 We’re excited to announce that we now represent Finnish artist Kebu (AKA Sebastian Teir), the bright comet in the world of synthesizer music, who was awarded ‘Best Artist 2017’ in the German Schallwelle Music Awards. Kebu gained popularity through his YouTube channel, attracting over 40 million views and fans from all around the globe. Kebu has toured extensively across Europe and has given over seventy concerts in twelve different countries.

Kebu’s concerts evoke an atmosphere of warmth and joy, utilising an impressive arsenal of analogue synths, reminiscent of the best solo synthesizer artists from the 1970s and 1980s. Kebu’s 2016 album, ‘Perplexagon’, debuted at number 6 on the Finnish album charts and was nominated for ‘Best International Album’ in the German Schallwelle Music Awards. His forthcoming album, which will be released by ZYX Music in May 2019 on CD and DVD, is a two-hour live recording of a recent concert in Oslo.

While Kebu is best known among synthesizer enthusiasts, his talents have also come to the attention of film makers and creators. In 2017, Kebu was commissioned by his birth town, Kristinestad, to write a special composition celebrating Finland’s 100th birthday. The resulting 18-minute piece for synthesizers and a 100 strong choir had its premiere at Finland’s independence day celebrations in front of a rapturous audience.

In February 2019, Kebu was invited to perform twice at the 8th edition of the Film Music Prague Festival: first, with a concert of his own works, supporting ‘Stranger Things’ composers Michael Stein and Kyle Dixon, and then as part of a concert dedicated to the film music of Ridley Scott, performing the iconic Vangelis score for ‘Blade Runner’.