Air-Edel’s Patrick Jonsson was interviewed by Sontronics, a British world-class microphone company. Patrick owns and uses their ‘ARIA’ microphone, which was launched in 2014. The Sontronics ARIA valve/tube cardioid condenser microphone was developed and designed by Sontronics founder and designer Trevor Coley specifically for getting the best from your vocals.

PJ: “The first time I heard  ARIA was at my friend Joe [Rubel]’s studio, Pixel, on a cello recording by Peter Gregson who is an avid ARIA user. I loved how it sat in the mix; I felt the sound captured both the depth and roundness of his cello while being present and sounding really open. Needless to say I picked one up very shortly thereafter! I am a huge fan of the ARIA, it occupies a space in my studio right next to where I sit and I can swing the stand over and record anything very quickly. Clients love how it looks, and the power supply and cable are both a really solid build. I also really like the inclusion of the high-pass filter and pad switches on the power supply. A lot of modern mics require help in the mixing stage in terms of EQ and saturation to bring things to life, but the ARIA sounds good to me on everything. If you take the time to find the correct mic placement, in my experience you’ll virtually never have to do any corrective EQ. I record all kinds of instruments all the time and need them to be able to hold up all the way up to big cinema systems, and I really feel confident with the ARIA when handing things over to music mixers or dubbing mixers in a way which I wasn’t with previous mics I used in my own studio.”

In the interview Patrick also spoke about the recent Academy Award win for ‘The White Helmets’:

PJ: “To win an Oscar for ‘The White Helmets’ was such a surreal moment. I’m not sure if it’s sunk in yet. On one hand it feels amazing that the film has been recognised for its craft, but more importantly, it’s brilliant that more people will get to know about the White Helmets and the struggles they’re still facing in Syria. It was such a humbling moment to see Orlando and Joanna [Natasegara] accept the award and read out a powerful reminder of whom we made this film for. When all of Hollywood gave a standing ovation in solidarity with the heroic rescue work those guys are doing over there every day, it was a really emotional moment and we all felt really proud to have been able to bring this important story to the world.” 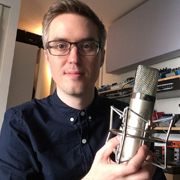 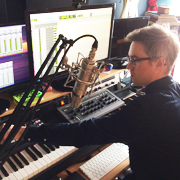