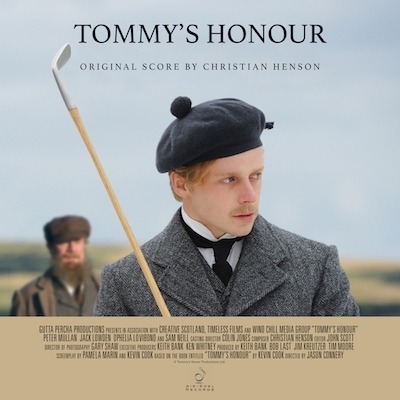 ‘Tommy’s Honour’, directed by award-winning director Jason Connery, stars BAFTA-nominated and Olivier Award-winning Jack Lowden as Tommy and acclaimed actor and multi award-winner Peter Mullan as his father.  In every generation, a torch passes from father to son. And that timeless dynamic is the beating heart of ‘Tommy’s Honour’ – an intimate, powerfully moving tale of the real-life founders of the modern game of golf.

“Having been a family friend of Jason for around 30 years now, it was nerve wracking for both of us to sit through an early assembly of TH. But I turned to him and said “Jason, it’s really really good”, which sponsored quite an emotional reaction, it was only a few of us in the room and Jason had worked so hard to create this wonderful film. The striking thing for me was that he had placed absolutely no temp (temporary music from other films used as a placeholder to help the editing process), indeed he went all the way to lock without it. The reason Jason gave was he just couldn’t hear what the music should be, the thing was though, I had always known in my heart what it should be.

I got Jason around to the studio to play him through the instruments and sounds I would use and then set to work. About two weeks later he came to see some early sketches and because of our play-through day he wasn’t surprised by what I had done, but he was surprised at the effect it had on his movie! Having not temped it meant we had an amazing voyage of discovery creating the score for what is ostensibly a tragedy, with a purposely simplistic, and at times rough and ready score that reflected the simple folk and the raw settings of the coastal links courses. I’d like to thank Jason for the opportunity of creating something fresh and new with him and can’t wait to work with him on the next one!” – Christian Henson

Nick Taylor recorded and mixed the score for the album which is available for purchase and streaming from 12th April across a number of digital platforms including Amazon, Spotify and iTunes.  The album release coincides with the New York premier of the film ahead of the US cinema release on Friday 14th April.  The world premiere of the film took place in June 2016 at the opening gala of the Edinburgh International Film Festival.