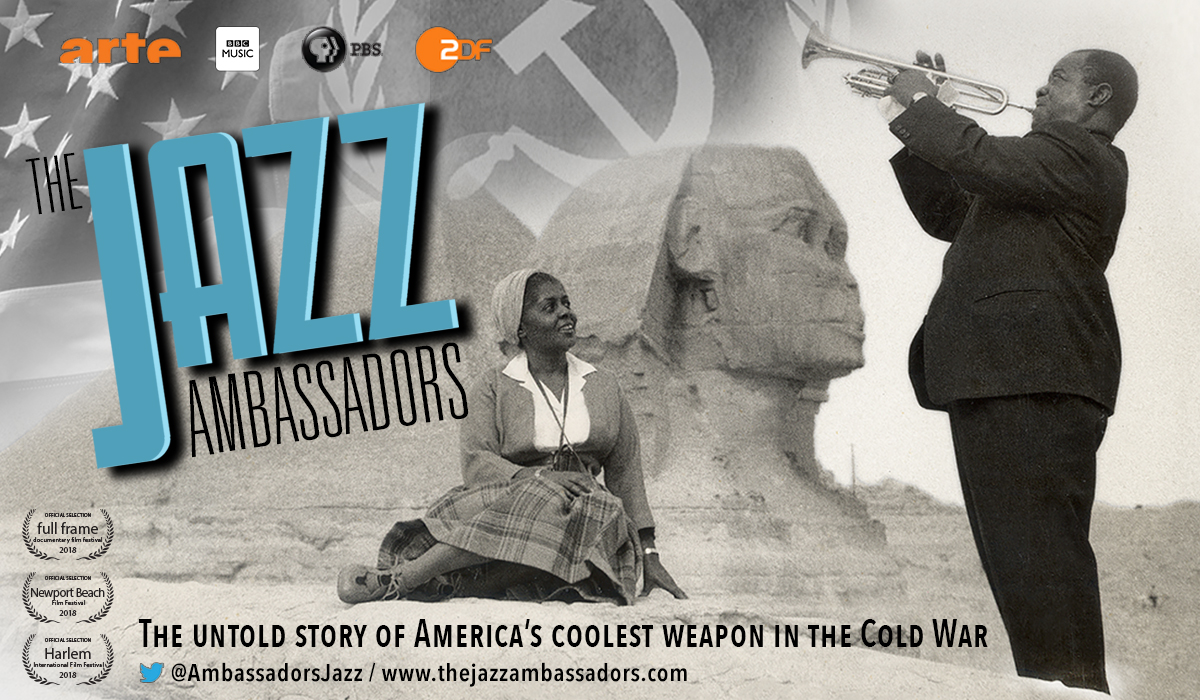 ‘The Jazz Ambassadors’ is premiering tonight on BBC 4 at 9pm, and PBS at 10pm so we chatted with composer Michael J McEvoy and engineer Nick Taylor about working on the documentary.

Michael, could you tell us about how you became involved in the project and what it was like collaborating with director Hugo Berkeley?

My involvement came about through my agent Maggie Rodford, who knew the film maker Mick Csáky. Mick was the producer on the JAs project and Maggie suggested to Mick that I might be a good fit as I have a passion for Jazz, having worked on other Jazz orientated scores such as Richard Linklater’s ‘Me and Orson Welles’. So a meeting was set up with Hugo. Ultimately it was up to him to decide if I was the person he wanted to score the film.

I met with Hugo at his edit suite in Shepard’s Bush and we sat together going through the film. I had an immediate connection to the subject for a number of reasons. Although it was essentially telling a story about Jazz and Jazz musicians, the central idea of the film was about the power of music and the artists who created it to bring about big political changes in the world and to build unifying connections with different cultures across the globe. This is something I relate to personally and which has been an underlying motivation in my own musical career. The arts in general is a way bridges are built between nations. This is of particular importance during times like we’re living through now when there is so much contention and division.

This is the impetus, besides wanting to tell a fascinating story, behind Hugo’s film making.

In Hugo’s interview with London Jazz News he mentions how the creative brief he gave required you to “stitch together” the different musical styles of all the different protagonists – Armstrong, Ellington, Brubeck, Gillespie. Where did you begin in joining these sound worlds and how did it impact your composing process?

While watching an early cut of the film in the edit suite Hugo and paused every so often to listen through to some of the more reflective tracks from my albums ‘the long way home’ and ‘Terra Cognita’. Hugo could hear the organic ‘live’ recording we could achieve at Air-Edel with engineer Nick Taylor. Nick had engineered my album ‘the long way home’, which we recorded live with all musicians in the same room during two day session at Air-Edel.

We also identified elements in some of the temp tracks Hugo had in the film that seemed to underscore the reflective mood well. The score didn’t want to pastiche or emulate the performances on the screen. The score needed to act as a kind of sonic glue. We ultimately came to the conclusion that there should be a central musical approach that would weave a continuous thread through the various musical styles the film travels through. This approach would also hopefully help provide a mediative and reflective state of mind in the viewer and subtlety underscore the information being conveyed. We also hoped it would give the film a cohesive sound-world that would be somewhat outside of the unique musical voices of the artists represented in the film.

The soundtrack features some of London’s finest jazz musicians such as Paul Booth, Freddie Gavita, Mark Mondesir, and Dennis Rollins – did you already have these players in mind when composing the score?

8 of the 9 musicians on the score I had worked with before or had seen perform and liked their vibe and how they played. I remember seeing Mark play back in the 1990s with a phenomenal piano player named Jason Rebello who’s a friend of mine. Mark has played and recorded with so many incredible artists including John McLaughlin, Julian Joseph and Chris Potter. I’d always wanted to work with him. He’s a virtuoso and has a beautiful touch and incredibly dynamics. Bass player Karl Rasheed Abel was another guy I first saw with Jason Rebello. He’s got such a solid groove and a deep pocket – so I had the feeling that those two would be a great counter balance to each other and lay a strong rhythmic foundation. I’ve worked with both Freddie and Paul a lot recently on my solo projects. They are both fantastic artists and have a fluidity and depth to their playing. I’ve also worked with Kevin Robinson many times going way back to the 1990s. Dennis is someone I’ve been trying to work with for many years so it was a pleasure to have him on board. He’s one of the best trombone players in the UK. They are all beautiful players and a great guys, and all players I had either  seen perform live or had known about for a while – so as you see I chose these guys very carefully. The vibe in the room was really important to me. I wanted all the players there to feel that what we were was doing was special, performing a music score that was supporting an important document of Jazz History that would hopefully be watched, listened to and enjoyed for many many years. I believe the score fully embodies that vibe. It was an immense honor and privilege to work on this project and I’m very proud of it.</em

Nick, you have worked with Michael for a long time now, most recently on feature film ‘Finding Your Feet’ – in what ways was this project both different and similar to those you have done before?

We’ve worked together on lots of projects over the last decade – albums, TV and Film and we’ve worked across many genres. We’re also friends and often and go to gigs together – mainly jazz. We both listen to a lot  of this music – I would say Mike more widely whilst I really love a lot of the period between 1950 and 1968 –  this is probably mostly what I listen to. So,  we were both really into the story – I had no idea about it and was surprised that it wasn’t more widely known.

After Mike told me about how he wanted to approach it I realised that this was a rare chance to work in a way that is fairly rare in film scoring – working in a way that is more akin to making an album, in a proper jazz environment with jazz musicians who are out there playing all the time. This obviously means improvisation and not working to click. Whilst this score is not unique in that sense, of course, it is a rarity now to have that luxury.

Often, if you do work without click there is usually a conductor working with streamers. These are visual references for him or her to see bar and timing references laid over the picture. So they will be keeping the band in time – making sure that certain hit points are in the right place.

With this score the players just played to the picture  – on large screens in the live area whilst having the dialogue in their cans. The obvious comparison for this is Mile’s Davies’s score for the French film ’Lift To the Scaffold’ (Ascenseur pour l’échafaud), which was famously recorded in this way (minus the dialogue in the cans).

This was never referenced by anyone but I think it was just obvious to Mike and these particular musicians that that’s how it would be approached – we didn’t really discuss it too much.

The result of this  is that the finished score isn’t jarring when played next to the source jazz material on screen. It’s clear what’s score and what is old jazz recordings but the two meld together brilliantly – it was very enjoyable to mix.

To answer the question (finally!) I would say that Mike’s jazz influences come through in a lot of his work  – there are jazz references and voicing’s in ‘Finding Your Feet’ for example. It’s innate in his writing and, for me, all the better for it. The difference in this score is that this influence and aesthetic was very much at the fore. Also – in true jazz fashion – we were done recording and mixing in much less time than more conventional scores.

We posted a short clip of the band from the recording session online last year, could you give us a bit more detail about how and why you set up the room in that way, and the equipment you used?

My main concern was to make sure that there are as many open sight lines as possible. Ideally, you want everybody to be able to see everybody else. We did make booths (with windowed baffles) for the drums and bass player but we tried to keep the room as open as possible.

The booths allowed us to control the level of horns in a more of a detailed way than if we’d have not had them but this is a pretty standard set up – if it’s planned out the baffles shouldn’t really cause any problems. Also Mike was playing the piano so I made sure that everybody could clearly see him. And then of course there were the screens for picture which also needed to be seen. Once everybody was in place I went in and moved these into positions where they could be seen by everybody.

The micing was generally how I’d set up  – lots of ribbon mics and some of Air Edel’s vintage valves. In the mix I kept it very  simple  – mixing entirely on the desk with just valve compression and very little else.

What are your favourite cues from the score and why?

It’s hard to say – they all have their place in the film, but I think the piece that is used in the end credits is one of my favourites. It’s has a sombre, rather melancholic melody which has a beautiful alto sax solo towards the end played by Patrick Clahar.

Also another delicate ballad I like a lot is in the last portion of the film after the Duke Ellington section. It has a beautiful soprano sax player by Paul Booth. But there are others. I’m hoping to get a soundtrack release because I think people would enjoy the score as a listening experience. Nick did an amazing job recording and mixing the score. Recording 9 musicians in the same room, brass players too (!), all playing to picture, and creating such a cohesive, warm sound is no small feat! But Nick works musically – he’s a very special guy who has a beautiful heart and he brings that passion to his work.

Michael, aside from tonight’s premiere on BBC 4 and PBS, are there are other screenings planned for the documentary?

There are quite a few screenings going on and more planned over the next year in different countries around the world. These are in addition to the TV broadcasts. The film was screened this past week at the Smithsonian Institute in Washington DC, and on Friday night it will shown in the Harlem film festival in New York. There are many other festivals planned, in fact we’re currently in discussions with the organizers of the London Jazz Festival about a London Screening at the Barbican during the 2018 festival alongside a live performance of some music from the film. The film will also be broadcast on Arte and ZDF in Europe on the 20 May.

This film is very timely because it demonstrates the power of music to build bridges and connections between different cultures. Jazz in particular has a unique power as it’s based in Improvisation- it’s about listening to the musical conversation as opposed to reading notes on a page. It represents  freedom of expression and the personal voice within an agreed set of parameters where one also respects the voice of the other.